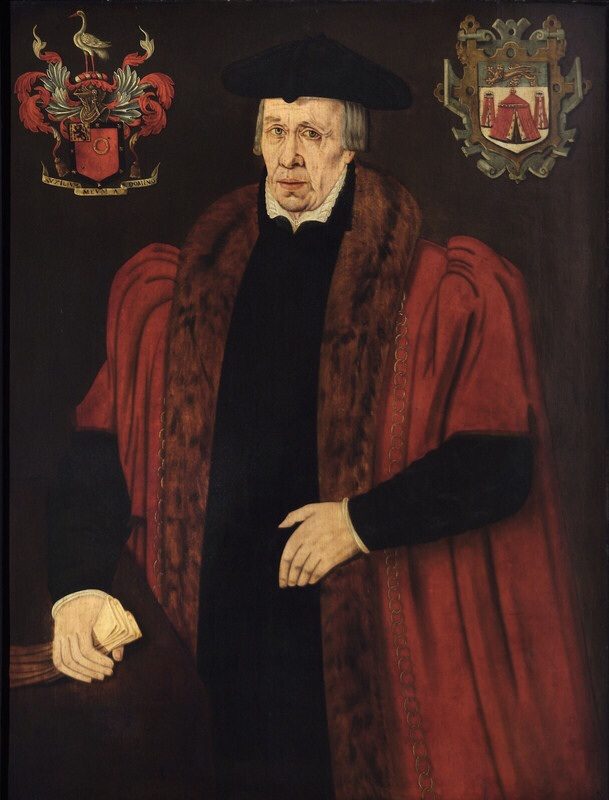 The Lodge and Chapter are named after Sir Thomas White, a member of the Company. He was believed to have been involved in the founding of the School, but time has proved this not to be the case.

Thomas White was the son of William White, a clothier of Reading and his wife Mary, the daughter of John Kibblewhite of South Fawley. He was brought up in London.

Sir Thomas was twice married, to Avicia (died 1558) and to Joan. A principal member of the guild of Merchant Taylors, he served as Sheriff of London in 1547, and was elected Lord Mayor of London in 1553. He was knighted in the same year by Queen Mary I. He was a member of the commission for the trial of Lady Jane Grey.

In 1555, inspired by the example of Thomas Pope, founder of Trinity College, Oxford, White obtained a royal licence for the foundation of St John’s College, Oxford, dedicated to the patron saint of the Merchant Taylors and established in the buildings of the dissolved Cistercian College of St Bernard.

He was involved in the foundation of Merchant Taylors’ School, and made provision that scholars of the college should be nominated from pupils of the school. He also established scholarships at St John’s College, tenable by pupils of Tonbridge School, Bristol Grammar School, Reading School and King Henry VIII School, Coventry where one of the school’s four houses bears his name. He purchased Gloucester Hall and set it up in 1560 as a hall of residence for scholars; this became the basis of the later foundation of Worcester College. As a result of his philanthropy, he was listed in Richard Johnson’s Nine Worthies of London in 1592.

We use cookies on our website to give you the most relevant experience by remembering your preferences and repeat visits. By clicking “Accept All”, you consent to the use of ALL the cookies. However, you may visit "Cookie Settings" to provide a controlled consent.
Cookie SettingsAccept All
Manage consent

This website uses cookies to improve your experience while you navigate through the website. Out of these, the cookies that are categorized as necessary are stored on your browser as they are essential for the working of basic functionalities of the website. We also use third-party cookies that help us analyze and understand how you use this website. These cookies will be stored in your browser only with your consent. You also have the option to opt-out of these cookies. But opting out of some of these cookies may affect your browsing experience.
Necessary Always Enabled
Necessary cookies are absolutely essential for the website to function properly. These cookies ensure basic functionalities and security features of the website, anonymously.
Functional
Functional cookies help to perform certain functionalities like sharing the content of the website on social media platforms, collect feedbacks, and other third-party features.
Performance
Performance cookies are used to understand and analyze the key performance indexes of the website which helps in delivering a better user experience for the visitors.
Analytics
Analytical cookies are used to understand how visitors interact with the website. These cookies help provide information on metrics the number of visitors, bounce rate, traffic source, etc.
Advertisement
Advertisement cookies are used to provide visitors with relevant ads and marketing campaigns. These cookies track visitors across websites and collect information to provide customized ads.
Others
Other uncategorized cookies are those that are being analyzed and have not been classified into a category as yet.
SAVE & ACCEPT